Separate serum within 6 hours and store at 2-8°C and transport on ice packs within 7 days.

*The samples should be stored for not more than 7 days at 2-8°C.

**For longer delay, freeze at -70°C or below and transport on dry ice.

***Blood must be processed within 6 hours after collection.

Syphilis is a disease caused by infection with the spirochete Treponema pallidum. The infection is systemic and the disease is characterized by periods of latency. These features, together with the fact that Treponema pallidum cannot be isolated in culture, mean that serologic techniques play a major role in the diagnosis and follow-up of treatment for syphilis.

The serological diagnosis of syphilis is divided into treponemal tests for measuring syphilis antibodies and nontreponemal tests. Nontreponemal tests, such as the rapid plasma reagen (RPR) test and the veneral disease research labortaory (VDRL) test, detect reagin-based antibodies produced in response to treponemal infection. Reagin is a lipoidal antigen. The test lacks specificity because reactive antibodies can be elicited in diseases and conditions unrelated to syphilis, giving rise to biological false-positives. However, nontreponal tests are useful for determining the stage of infection and to monitor treatment success. Successful treatment reduces the amount of lipoidal antigen that can be monitored by observing a decrease in RPR/VDRL titre. 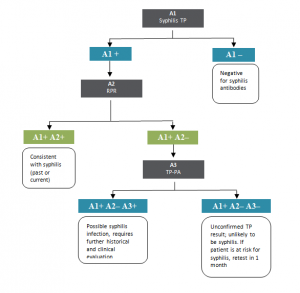 Approximately 90% of all syphilis is sexually transmitted and can be acquired from an infected person by kissing or touching an active lesion, which is most often present on the lips, oral cavity, breasts, or genitals. Those individuals who are higher risk of disease are those who have had contact with a known case of syphilis including those from an endemic area, or who have sex with someone from an endemic area as well as those who are involved in commercial sex work. Transmission may also occur from the following routes: transplacental infection of the fetus during pregnancy, blood transfusions if the donor is in the early stages of disease, through lesions on the hands of health care workers or through touching of children with early congenital disease.

Persons who have syphilis might seek treatment for signs and symptoms of primary infection (i.e. ulcer or chancre at the site of infection, a symmetrical maculopapualr rash involving the palms and soles with associated lymphadenopathy), secondary infection (i.e. manifestations that include, but are not limited to, skin rash manifested as a non-pruritic maculopapular eruption, mucocutaneous lesions, and generalized non-tender lymphadenopathy, and condyloma lata, mucous patches, fever and malaise will occur.), neurologic infection (i.e. cranial nerve dysfunction, meningitis, stroke, acute or chronic altered mental status, loss of vibration sense, and auditory or opthalmic abnormalities, which might occur through natural history of untreated infection), or tertiary infection (i.e. cardiac or gummatous lesions). Latent infections (i.e. those lacking clinical manifestations) are detected by serological testing. In the latent-asymptomatic stage, the early period appears less than 1 year and 25 % of cases will relapse to secondary cases. Gummateous lesions of skin, bone, subcutaneous tissue can appear in the tertiary stage as well as cardiovascular symptoms including aortic aneurysm and aortic regurgitation as well as neurosyphilis. The laboratory diagnosis of neurosyphilis usually depends on various combinations of reactive serological test results, CSF cell count or protein, and a reactive CSF-VDRL with or without clinical manifestations.

The risk of congenital syphilis is 50% for babies born to mothers with untreated primary, secondary or early, latent syphilis. There may be no symptoms in 2/3 of these cases. Some of the symptoms that may occur are low birth weight babies, rhinitis, hepatosplenomegaly, rash, anemia, metaphyseal dystrophy, and stillbirth. The symptoms of early syphilis may present in the first 2 years of life. Routine screening is performed on all pregnant women in Canada. For prenatal syphilis screening, the IgG test is recommended. IgM testing should not be performed during routine pregnancy screening unless clinically indicated.

This disease occurs worldwide. Infectious syphilis (primary, secondary and early latent stages) is the least common of the nationally reportable bacterial STIs. In Canada the preliminary rate for infectious syphilis for 2006 is at 4.6/100,000, up from 3.9/100,000 in 2004. The rate of infectious syphilis is increasing in both males and females, but more so in males.

Most patients with REACTIVE TP tests will have reactive tests for the remainder of their lives, regardless of treatment or disease severity. However, 15 – 25% of patients treated during the primary stage of disease revert to being serologically nonreactive after 2 – 3 years.  The use of TP test to screen samples, in contrast with previous strategies to screen with nontreponemal RPR tests, will identify identify both persons with previous treatment for syphilis and persons with untreated or incompletely treated syphilis.

A confirmed REACTIVE TP test after age 18 months is diagnostic of congenital syphilis. For most HIV-infected persons serological tests are accurate and reliable for the diagnosis of syphilis and for following a patient’s response to treatment (i.e. RPR). However, atypical serological test results (i.e. unusually high, unusually low, or fluctuating titres) can occur in HIV-infected persons.

Serological tests for syphilis are uniformly reactive with yaws, pinta, and nonvenereal endemic syphilis (bejel) cannot be excluded. Therefore, patient history, the clinical appearance and anatomic locations of the lesions, the mode of transmission, and the age of the individual are the only criteria that can be used to diagnose these infections as separate entities.

Enter your email address below to receive important updates from our labs!